With the end of the Galactic Unification War and the formation of the Federation among the highly civilised races, the whole universe has entered an era of stability.
However, there are still many problems to be solved, such as the reconstruction of the war-devastated planets and the contact with the less civilised star systems.


One day, in the fourth galaxy, the colony system 807 - the planet Diome - suddenly cuts off all communication with the outside world and completely stops functioning as a colony.
Investigation teams were dispatched to Diome many times, but all went missing,
and finally the Galactic Joint Forces formed a direct investigation unit and rushed into the planet in combat .
However, as with previous expeditions, all the troops had disappeared.


The Federation leaders were distressed by the unprecedented anomaly and refrained from making
an official announcement.
During this time, the entire 807 star system was in the same condition as Diome.
When a fleet of ships goes missing with Princess Ryana, the symbol of space peace,
the fact becomes known to the whole universe, and it caused great fear in the people.


The protagonist, Ark, must collect and repair the parts of a shuttle
that was split into 8 pieces and imprisoned by heavy magnetic force.
Once again, the source nucleus of SAZIRI must be sealed and treated.
To do this
Each part has a self-destruct mechanism that is already counting down,
and if the stage is not cleared within a certain time,
it will explode and there will be no way to stop SAZIRI.
In addition, each boss is located in a different space and can
only be fought by finding some way or at a special time.
In order to do this, it is essential to collect information
and solve puzzles during the stage.
Ark will have to rescue Princess Ryana, solve the mystery
of SAZIRI, and save the universe.
Could it be the return of the legendary savior?

It consists of eight worlds, seven of which, except for the final world,
are divided into a first half (Stage 1) and a second half (Stage 2),
separated by a visionary scene.
The key to the visual scene is the "force unit".
If you clear stage 2 and defeat the world boss within the time limit,
you will get the parts and can proceed to the next world.

Stage 4-1: Enter the space-ship.
Stage 4-2: Find signs of medical supplies, then at the end-point of the stage, remove your feet from the ground (jump).

Stage 5-1: Enter the laboratory
Stage 5-2: Cut off the energy supply at the computer terminal , then just make it to the end-point.

Stage 6-1: Examine the cold sleep unit.
Stage 6-2: Open the message box, then get to the stage's end-point around 4am.

Stage 7-1: Examine the powered-on monitor.
Stage 7-2: Pass the check point .Get to the end of the stage 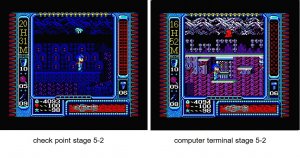